California is blessed with oceans, mountains, deserts and hot springs. In fact, it was at a semi-commercial spring in California that I got my first taste of soaking. My photographic partner, Peggy, and I had actually carried a hot springs guidebook around with us for a couple of years on our wanderings in search of old motel signs. We had never actually hit a spring, though. Then she was on a trip without me one cold winter and she hit a spring in Arizona. She called me the next day to rave about it. So five months later, after camping in the Mojave for a few days, we consulted the now-worn book and realized we were not that far from Miracle Hot Springs, along the Kern River in the southern foothills of the Sierra Nevada range. We detoured the fifty miles or so, paid a small fee to the people who maintained this spring, and soaked, alternating hot soaks with cold plunges in the rapid Kern river. It was like a spiritual awakening. There are a few pools there, each one cooler than the one above it, and the hottest one was simply too hot, although an old Japanese gentleman was blithely soaking in it. When he saw me yank my foot out after testing it, he simply said "It's all in the mind," which gave me plenty to think about for weeks.

Anyway, I have no pictures to post here of Miracle, but it's a lovely spring that's not half bad for a semi-developed place where you have to pay a bit of money and there are always other people around. There are other photos, though, and please remember that what follows is just a small sampling of California's springs.

Southern California has few springs, but one particularly nice one is the Five Palms Oasis, down near Brawley, along the Mexican border. Once you leave the highway and turn onto BLM land in the low desert, you'd think it was just going to be an endless stretch of sand and scrub. After a few miles, though, a cluster of palm trees comes into view and, there, shimmering in the shade of those palms, is a lovely, shallow warm spring. 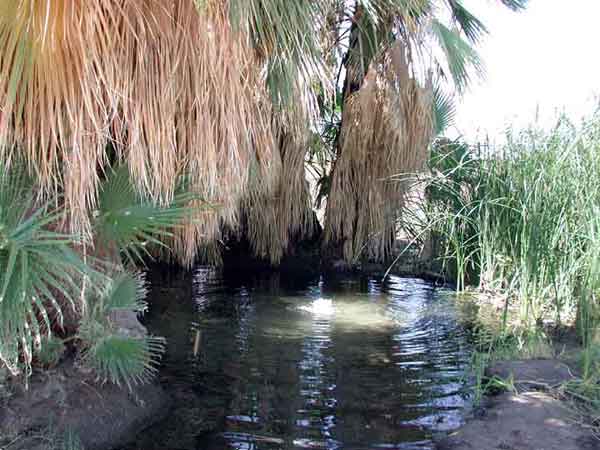 You might get carried away, stop the car, and just jump in... 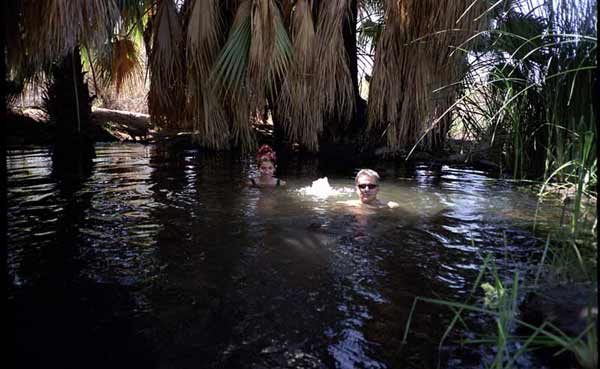 That's okay. Enjoy the soak, the shade, and the songs of the birds who call this spring home. Just be careful not to park in the quicksand-like pullouts on the side of the dirt track. Stay on the firm areas or you might have a long walk out to call the towtruck.

Further north, in the long valley on the eastern side of the Sierra Nevadas, lies California's hot water mother lode. It begins in the Owens Valley and continues up to Carson City, Nevada, on California Route 395 and includes some of the great hot springs in the state. Here are a few of them. 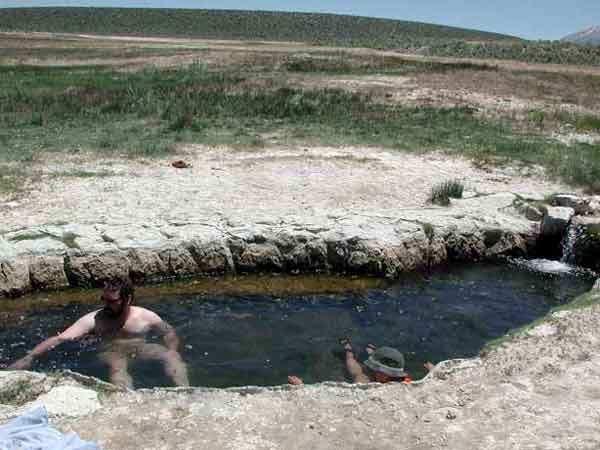 Here are my friends Paul and Peggy in "Wild Willey's" hot spring, also known as "Crowley's," near the town of Mammoth Lakes, in an area blessed with lots of hot water. The "Crab Cooker," below, and "Hilltop" are all within ten minutes of each other. 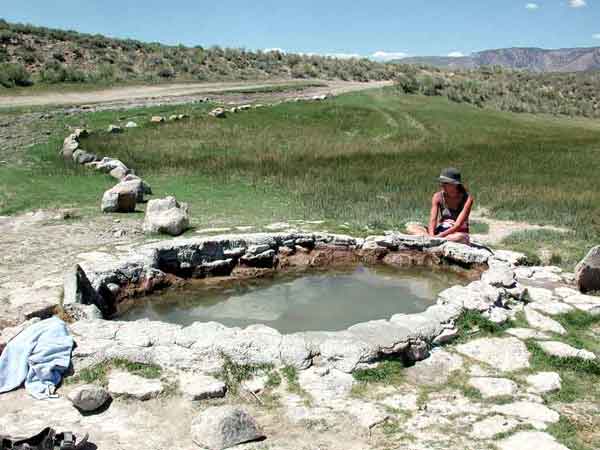 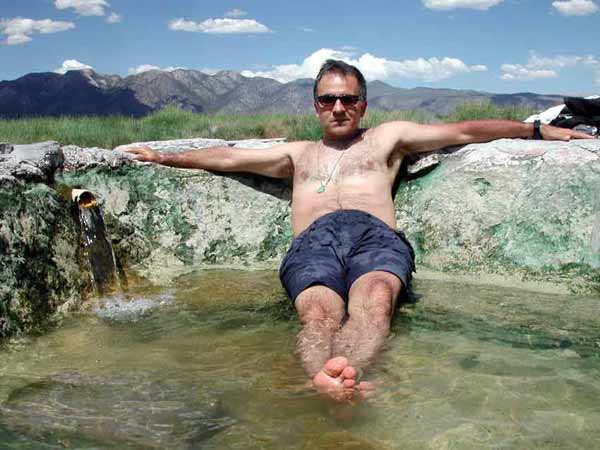 What on earth am I doing living in New York City?

That's a really good question for which I have only weak answers at the moment. But let's not think about that now. Back to California.

North and West of this area, not far from Napa Valley, is the town of Calistoga, which sits atop a tremendous reserve of hot water. It's all about spas and resort-type springs here. No money, no soak. It can be fun, though, if you're in the area, to stop in for a hot mud bath at one of these places. Just watch out for some other stuff that they might try to pull on you. Know what you're paying for. 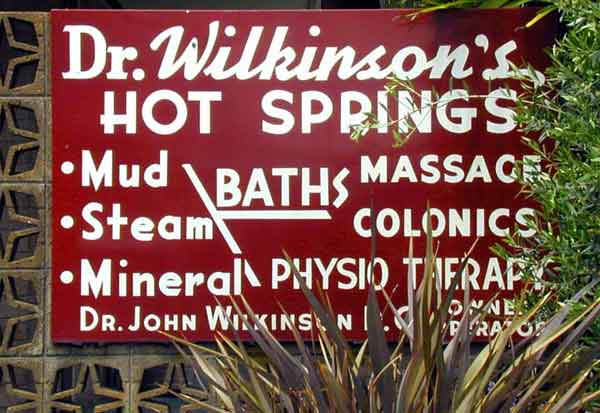 Back on the Eastern slopes of the Sierras, once again along 395, near the town of Bridgeport, are two more great hot springs. 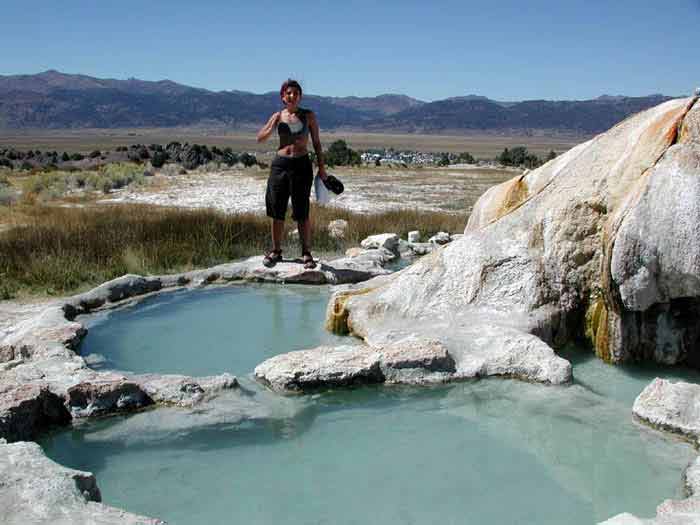 Travertine is a great soak, with a few volunteer-build pools created at the base of a Travertine mound that gives the source its name. 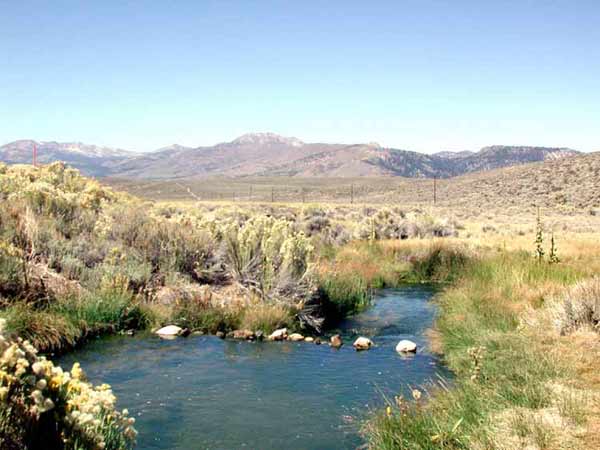 Fales Hot Ditch is another soak right off the shoulder of the road, which makes for a lovely break on a long ride.

And we'll leave our all-too-brief tour of California springs with a glimpse of the Eagleville Hot Spring, way, way, way up in the Northeastern corner of the state. It's right off the road, then down an incredibly steep slope. There's a hot pond and an old wine cask, which makes for a particularly nice soak on the long drive to or from the magical town of Gerlach, Nevada. 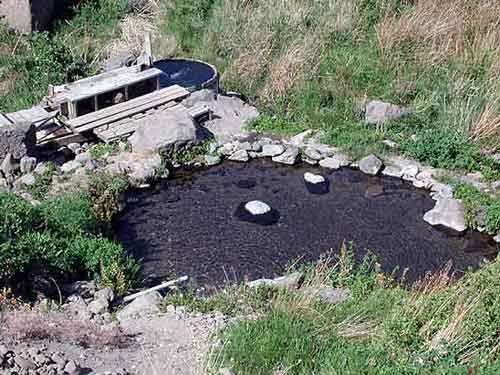